Brütsch were best known for producing a large number of different microcar designs, but only produced small numbers of each design and the primary function of the company appears to have been that of the development and promotion of each design to sell licences to manufacture to other companies. Many of the bodywork designs were simple two-piece mouldings of polyester reinforced with fiberglass, bonded at a waistline join, which was then covered by a protective strip. The Brütsch Mopetta is an interesting historical curiosity, only 14 of the microcars were ever made and even though there were some negations with Opel, nothing came of the talks and sadly the car never saw a production run. Originally designed and built in a single day by Egon Brütsch in 1956 the Brütsch Mopetta is a 2-stroke, 50cc 3 wheeler with a top speed of 30mph and enough seating room for one man, his flap cap and his pipe. It isn’t hard to imagine the Mopetta taking on icon status in much the same way that the Messerschmitt, Goggomobil and Peel Trident did in the 1960s. Georg Von Opel planned to build the Mopetta at the Horex factory to sell it as the Opelit at his Opel dealership but he lost interest in 1958 and only 14 units were ever built.
This particular car, of which there are very few left in existence, is a delight for any enthusiast or collector. It also allegedly completed the slowest lap at Goodwood Revival one year! A rare and interesting micro car which will intrigue people for many years.

The Peel P50 is a three-wheeled microcar originally manufactured from 1962 to 1965 by the Peel Engineering Company on the Isle of Man. It was listed in the 2010 Guinness World Records as the smallest production car ever made. It had no reverse gear, but a handle at the rear allows the very lightweight car to be physically manoeuvred when required. The P50 used a 49 cc DKW engine, which gave it a top speed of approximately 37 mph and was equipped with a three-speed manual transmission that had no reverse gear. Consequently, turning in a confined area could be achieved only by pushing, or lifting the car using the handle on the rear and physically pulling it round.
Designed as a city car, it was advertised in the 1960s as capable of seating „one adult and a shopping bag“. The vehicle’s only door was on its left side and equipment included a single windscreen wiper and one headlight. Standard colours were Daytona White, Dragon Red, and Dark Blue. The 1963 model retailed for £199 when new (about £1,400 in 2010, or US$2,200). The company produced 50 P50s and only 27 are known to still exist, one of which was sold for a record US$176,000 at a Sotheby’s auction in March 2016. This model offered in red, may well hold the record for endurance having completed a 240 mile round trip to a microcar meeting in one day and having to navigate through London in the process. A great car for the collector and iconic in its innovative design 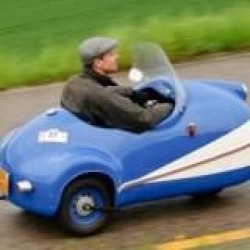